I didn’t know her, but I did; her passing connects me to the sadness of having loved and lost someone she seems to represent.

I took the day off yesterday to be with family. My nephew, Derek, and his beautiful daughter, Leila, were visiting from Boston. And my grand-kids, Emele and Jory, had just arrived home after a few weeks of visiting their grandmother in Panama City. Unless I’m overlooking someone, thirteen of us (including my new buddy, Miles − not yet born, but giving it serious consideration), had caravanned to Conner Prairie, just north of Indianapolis, yesterday evening.

We had tables near the stage, thanks to my sister, Cindy, and her husband, Andy. Everyone had a blast, grooving to the ISO with Brody Dolyniuk singing Freddie Mercury’s parts, performing the music of Queen, cranked up to proper, rock-concert volume.

The massive crowd was civil and very well-behaved until a riot broke out toward the middle of the show.

Fortunately the rebel-rousing was confined to just two tables − ours. There were no injuries (other than my niece, Kiley, being hit in the eye by a red seedless grape), and no arrests were made.

I’m pleading guilty anyway − of ignoring Queen for the last half-century. Not that I didn’t like them, more like I wasn’t paying attention. I have a perfect vinyl copy of A Night at the Opera in my collection, which I acquired at a garage sale in Buffalo, NY, back in 1996.

I’ve never once listened to it, until this past week. I put it on the turntable, cranked it up (to proper, rock-concert volume,) and was amazed at how varied and interesting the music was − not a dud on the LP. So, now I’ve added Queen to my list of favorites.

The amazing crate of technology my dad brought home in ’63 arrived just in time for two hugely historic events. I remember staying home from school in late November of that same year, and watching JFK’s funeral on TV − so somber and slow − blanketed in whispered reverence. I remember my mom crying, and the strange empathy I felt for her and the mourners I saw on the small black and white screen. An image, very similar to the one below, is still within my reach.

And then, just a few months later, after dinner on a Sunday evening, my entire family sat down and watched the Beatles in their first televised US appearance. I don’t believe I even knew who the Beatles were at the time. We were watching The Ed Sullivan Show because this is what we did on Sunday evenings. Maybe it was Ed’s hype, prior to their performance, or the reaction of the audience every time they were mentioned or hinted at, but I recall having the impression that something really really big was happening. I was in the third grade then. The next day at school, all my classmates were asking:

“Did you see the Beatles?”

I believe everyone immediately understood the impact JFK’s assassination would have on the world. And everyone had a sense for their part in this history, like 9/11. But the second event was a birth rather than a death. A lot of people recognized that this was something new, and a lot of people connected with it instantly. It may seem irreverent to compare the arrival of The Beatles with the death of an iconic leader, but try to imagine what the world might be like without either of these. I suspect the world would be a better place today if the Kennedy brothers were allowed to complete their missions, and the world would be a less hopeful place had The Beatles not happened.

The Swiss Army TV-set was moved to New Castle, Indiana, in 1965. Then, in the late summer of the following year, my mom stunned her offspring by bringing home the album, Yesterday and Today. She loved Paul McCartney’s song, Yesterday, and bought the record specifically for it. But really, what was she thinking? I mean, did she expect us kids to keep our paws off her Beatles album. It didn’t last long. LPs were not designed to withstand the kind of abuse we heathen Jones kids believed was normal.

Soooooo… what was the first record I spent my hard-earned cash on?

And my first LP purchase? This was the fall of ’66, as I recall. I could have bought, Rubber Soul, or The Stones’ Aftermath, Dylan’s Highway 61, Blonde on Blonde, Pet Sounds, or any number of great albums, but I held out for Herman’s Hermits on Tour, a little know masterpiece. 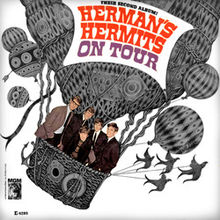 Notice the mystical message hidden within the lyrics? “I am I am.” Right, it slipped by me too, but I think it still managed to imbed itself into my psyche. That album woke something up inside of me… just for a fleeting moment, then fell back to sleep. But, hell, I feel like I completely redeemed myself with my next album purchase. You are going to say, “No way!”

I was in Kreske’s Dime Store (they had a cool, old soda bar there), on Broad Street, in downtown New Castle, where I saw this on their tiny record display:

Kreske’s probably had no more than a dozen rock albums in their store. I bought Freak Out having no idea who The Mothers of Invention were. I thought the cover was the coolest thing ever, and of course I liked the title. This album really did wake something up within me. A couple of weeks after buying it (perhaps a hundred listens later) I threw away my Herman’s Hermits record.

As mentioned in my last post, before becoming a author, I was an artist, and one of my inspirations was music. Twist the lid off this jar… There we go. Woowee! What the…?

Many of my fondest memories date back to the handful of years I spent growing up on a farm in Selma, Indiana. I wasn’t really a farm boy. My father was a carpenter. He rented the house, but not the barn or the cows. This place was out in the boonies, which I believe was my mom’s idea. Mud Dauber Road…

I was born in a trunk.

Mama died and my daddy got drunk.

Left me here to die alone

along the side of Mud Dauber Road.

For the first ten years of my life, there was no TV in the house. We had a radio on top of the fridge in the kitchen, though I really don’t recall a lot of music coming from it. I remember day-time soap operas and The Lone Ranger, Zorro, The Shadow − mostly stuff like that.

My dad, who seemed to be gone most of the time, would make an occasional appearance, whip out one of his harmonicas and play a rousing version of Running Bear, Yellow Rose of Texas, or Casey Jones − my siblings and I would dance to near-death. We all took to music like chewing gum to hair.

In the late-summer of ’63, my dad one day showed up out of the blue with a TV console – our first. Not only was it a TV, but also, built into it, were a radio and a record player − something I’d not seen prior to that day – the Swiss Army Knife of home entertainment. He’d bought two long-play records, Satchmo’s Golden Favorites and a Connie Francis album (or perhaps it was Kitty Wells), and also brought home a few 45s; one of them being Boomerang by Michael Convertino. I destroyed that record, playing it so much. 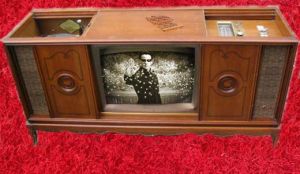 That year for Christmas, I got a build-your-own radio kit. It was a cheap, crappy bunch of wires and plastic that, when fully assembled, was supposed to amplify the signal from your nearby radio station enough to be heard over the blue plastic, ear-plug that came with it. Every part of this thing was made from the same brittle, blue plastic – even the circuit board.

To work properly, the radio had to be grounded. So, once it was assembled, I set it up on a stool by my second-floor, bedroom window and attached the ground wire to the lightning rod ground that ran down the side of the house, from the roof. Fortunately this was within easy reach, just outside my window. I remember my hand shaking, as I went to plug it in that first time. I was half expecting it to go poof, up into a little mushroom cloud, but it didn’t. I shoved the little, blue plastic plug into my ear, turned the tuner knob, and bingo… talking… people yakking. Hey! This thing was showing some real potential. I very slowly twisted the knob as far as it would go one way, found a few spots of garbled hillbilly music and some snowy, hushed gospel. What I was hoping for was music like I’d hear on the school-bus: Blue Velvet, Da Doo Ron Ron, Falling… But only the one station came in clear − just talking. I didn’t care though. It was my home-made radio. I built it, it worked, and I was proud.

But then, that same night, after being sent off to bed, I snuck over to my radio, twisted the little blue tuner knob, and found a top-40 pop station playing Sherry by The 4 Seasons. Like four tiny, lovestruck squirrels whining and moaning into my right ear… and this was only the beginning.